The 11th conference of the Nordic Association for Semiotic Studies, titled “Anticipation and Change ” took place in Stavanger, Norway, June 13-15, 2019.

The overall theme of NASS XI was «Anticipation and Change». Relevant topics included – the semiotics of child development and human development in general, social change, cultural change, environmental change, ontogeny, and evolution. The anticipatory aspect implies that future studies and the power of imagination are also relevant topics, as are, potentially, learning and perception, expectation and prediction, foresight and preconception.

Jaan Valsiner (Department of Communication and Psychology, Aalborg University): «The little big sign-makers: What can be learned from children for general theory of sign mediation?» 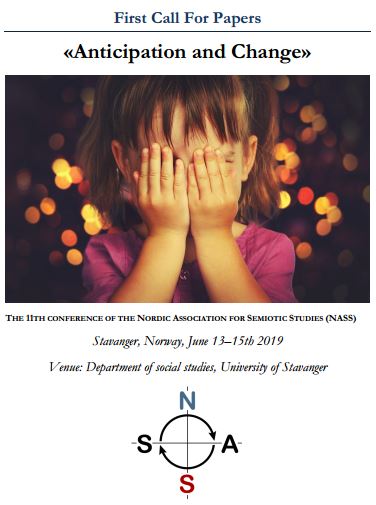 After a period of hibernation we refounded NASS as an organization. On June 9th 2012 a 25 year anniversary symposium was arranged in Imatra, Finland, as part of the 27 International Summer School for Semiotic and Structural Studies. The theme of the symposium was Nordic Semiotic Paradigms – NASS 25 years: Where do Cognitive, Bio- and Existential Semiotics Meet? The board of 2011-2013 approved a new constitution, which was consequently treated at the General Meeting of NASS in Aarhus in May 2013. We have also launched a regular newsletter – thirteen issues have appeared so far (the latest being the autumn 2018 issue).