Where do Cognitive, Bio- and Existential Semiotics Meet?

A symposium at the 27th International Summer School for Semiotic and Structural Studies (Imatra, Finland – June 8-12, 2012) 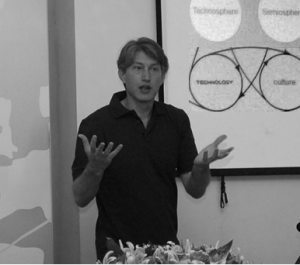 On June 9th 2012 the Nordic Association for Semiotic Studies (NASS) marked its 25 year anniversary in Imatra, Finland, as part of the 27th International Summer School for Semiotic and Structural Studies (June 8-12), arranged by the International Semiotics institute (ISI). The venue of the anniversary celebration was very much appropriate, given that NASS was founded in Imatra in 1987 – while its first conference was held in Lund, Sweden, in 1992. Eero Tarasti, who served as NASS’ first President, currently heads both the ISI and The International Association for Semiotic Studies (IASS). At the opening of the anniversary symposium Tarasti congratulated NASS, and recalled its founding. Further remarks were given in plenum by NASS’ past President Göran Sonessen and current President Luis Emilio Bruni.

The theme of the NASS symposium was “Where do Cognitive, Bio- and Existential Semiotics Meet?”. Cognitive semiotics, biosemiotics and existential semiotics are all promising, novel, dynamic subfields in contemporary semiotics. Neither of them are but regional paradigms – rather, Nordic researchers have been instrumental in establishing and consolidating them at an international level, with a sphere of influence which by far exceeds the Nordic region. Nordic semiotics has come to be very influential – and as Tarasti acknowledged in his opening remarks, the region remains a stronghold in contemporary semiotics internationally. The presenters of the symposium addressed similarities and differences between cognitive semiotics, biosemiotics and existential semiotics, in search of common ground and informative inspiration. The assumption was that despite differing inclinations and academic taste such a project should not be unattainable, given that the three fields are all somehow concerned with the semiotics of life.

The symposium program consisted of six talks. Luis Emilio Bruni (Aalborg/Copenhagen, Denmark) presented on “Embedded semiotics systems: Bridging bio- and cognitive semiotics”, while Göran Sonesson (Lund, Sweden) gave the talk “From the window to the movie by the way of the mirror: A phenomenologically inspired approach to the cognitive semiotics”. Morten Tønnessen (Stavanger, Norway) presented “Existential universals: A link between biosemiotics and existential semiotics” and also “Introducing semiotic economy”. Timo Maran of Tartu, Estonia, presented on “Biosemiotics and its applications to the study of culture”, whereas Lauri Linask, also of Tartu, asked: “Is Vygotskian perspective suitable for describing the emergence and development of sign?”